4 Ways to Measure Your Billing Department

Back in 2002, I knew little to nothing about billing. Unfortunately, I found myself in a position where I had no choice but to let two of my three billers go. I was left with a 3” stack of EOB’s that had not been posted, and a stack of claims that were a couple of months old coming up against timely filing. I decided then that I never wanted to be in this position ever again, so I stopped treating for three months and became a full time biller. I billed out claims, posted EOB’s and followed up on rejections, denials and appeals, and made collection calls to patients. I now know billing, and together with my physical therapy knowledge, I was able to create better systems for maximizing cash flow and reducing the aging of my A/R.

Regardless of who is doing your billing now,  if you sense that it could be better and feel a lack of confidence, then you most likely do have a problem. As the owner of the private practice, one of your most senior responsibilities are that over your money lines. No one else in your company is in charge of taking on that responsibility but YOU. To turn things around quickly, whether you are currently outsourcing or possibly still doing billing in-house, there are some key metrics to follow in order to ensure optimal efficiency and accountability.

At any physical therapy practice, whether you’re a five-man show or a fifteen office practice, you need to have the billing department set up with:

Of these roles, the accounts control officer is always the team leader. They will correct, change, modify, and improve the quality of the BO and EOB officer roles. They’re the one who is going to catch any errors coming in or mistakes made going out. They’re the one who is going to do any rebilling, secondary billing, resubmittals, and the patient statements and collections. If it’s not set up that way, you are likely losing money with duplication of duties or levels of inefficiency.

The 15 percent rule is that your over 90 days should not be greater than 15 percent of your total accounts receivable. Anything more means either you have a heavy auto/litigation, W/C population, or your team is not timely in cash posting and thus holding up secondary and patient billing.  Additionally, they are likely not making anywhere near the volume of patient collection calls that they need to.

Your collections should be doing over 100 patient calls per week in addition to keeping the unbilled report to a minimum.  This will keep your accounts receivable on target (especially for the over 90 days).

Balanced Billing at the Front Desk

Balanced billing means that billing is going out every day, EOB’s are posted every day, and the balance is shifted from the insurance company to the patient responsibility so that you can collect from the patient while they are still an active patient. This will allow you to have greater cash flow by collecting money over the counter while the patient is still in your office as opposed to having to send them a bill later. Additionally, make sure that 100% of patients are receiving statements each month and that you have the capability for them to pay electronically.

If you want to learn more about how you can be better at holding accountability over your own billing department, or if you’re looking for a partner that has proven experience and knowledge in billing and collections, contact us today. 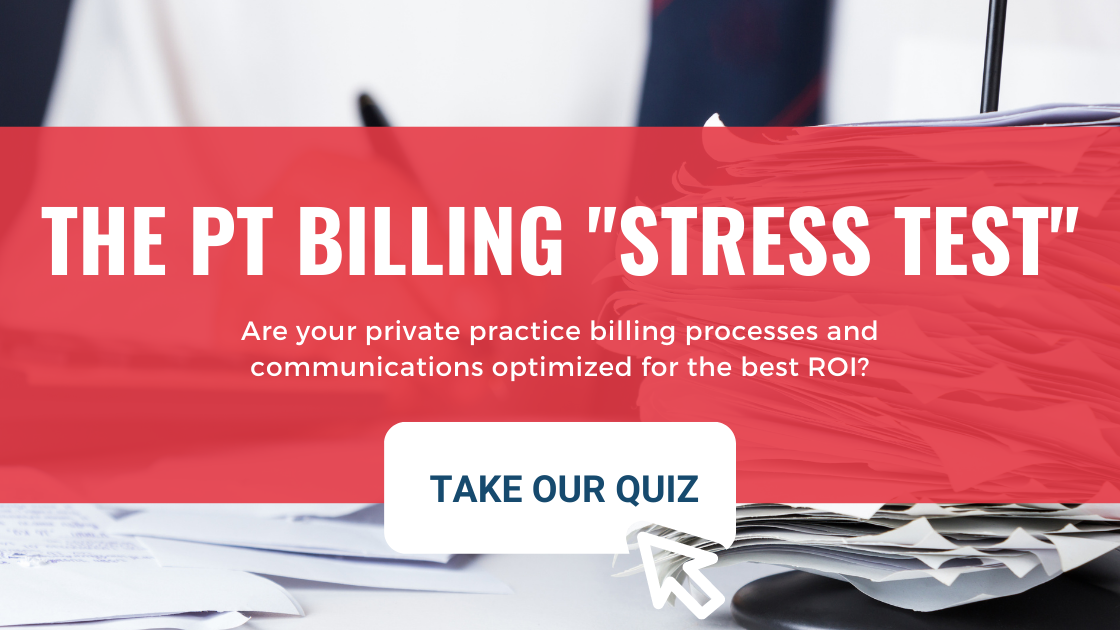 Brian Gallagher, PT is the founder and CEO of MEG Business Management, LLC. He has more than 27 years of experience in the field of rehabilitation and 19 years in business and specializes in Physical Therapy practice management and executive coaching nationwide. ​​As a licensed business management consultant, Brian has helped hundreds of business owners nationwide improve their business operations through proper restructuring to achieve improved systems of efficiency and productivity as well as marketing and sales with effective public relations which have proven results for double-digit growth year-over-year with businesses around the country.​